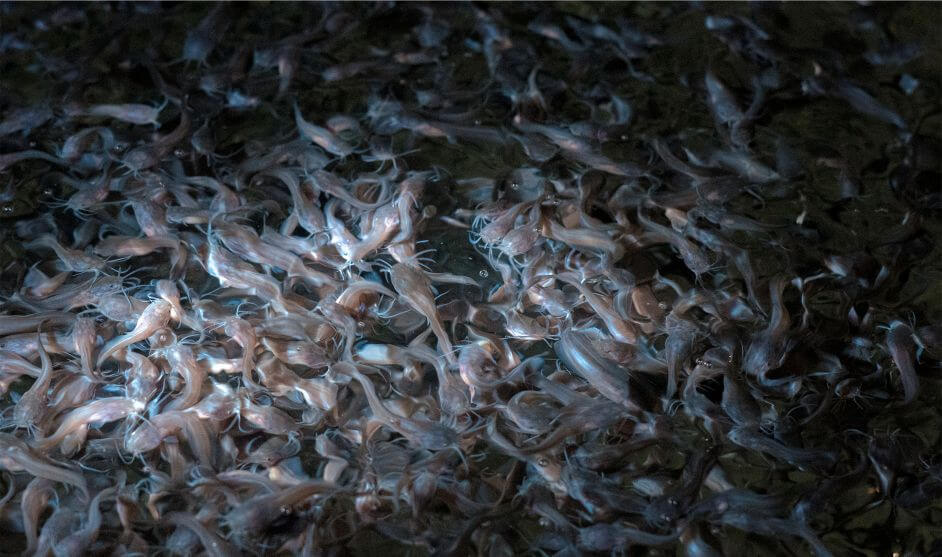 With a thriving domestic market and impressive sales in exportation, catfish is a very popular species in Nigeria, and it accounts for more than 80% of the cultured species in the country. It is also in high demand in other African countries largely due to its ability to withstand a wide range of temperatures, high stocking density, fast growth, and not to forget the sweet, mild taste.

Despite being this popular in Nigeria, the catfish farming industry in the country can be said to be in its infant stage as its marketing, production, and distribution are much lower than the demand. One major factor for the poor production output is the lack of standard facilities for hatcheries and the production of fingerlings.

If you want to go into catfish farming in Nigeria or anywhere else, one of the most important things you would have to have to secure is the fingerlings.

Fingerlings are fish that have just been newly hatched from eggs. This means that they have gone through the egg and larva stage and they now have characteristics of an adult fish, in this case, an adult catfish. After the hatching stage, it takes an estimate of six weeks for it to become a proper fingerling i.e. having adult fish characteristics. They are basically about the size of fingers. There are shooter fingerlings and Juveniles.

Shooter fingerlings are fingerlings with a fast growth rate. Fish farmers treasure shooters because they possess good genetic markers which is what makes them grow at a faster rate compared to other fingerlings

Juveniles are fingerlings that have been bred until they are fully grown, mature sexually, and can interact with other adult fishes.  They are stronger and tougher than fingerlings and can be easier grown in a pond system. They are costlier due to the extra cost for care and feeding. Once the weight of a fish gets to 750grams or 1 kilogram, then it is considered an adult. Fingerlings are bred in a hatchery.

A hatchery is a facility where fish breeding takes place for the production of larvae for the hatching of a new fish called fry which will then be reared into fingerlings. The hatchery could be indoors or outdoors and this facility comes in different scales such as small, medium, and large scales. With our state-of-the-art hatcheries and farms at Indigo Africa, we provide quality fish seed and we also provide organically grown fish.

The cycle of the fish goes from eggs to fingerlings to juveniles and then to young adults (mélange). For the breeding of fingerlings, one male catfish and two adult females are normally chosen, and these two females can produce between 5,000 to 10,000 fingerlings. Fish farmers always select the large fishes for breeding because they want to make sure that genetic markers for the production of large fishes are passed down as the larger the fish, the more profit the farmer will be able to make. Nigeria’s catfish fingerling production industry produces three species of catfish which are Clarias, Heterobranchus both of whom their common names are African catfish, and Heteroclarias (hybrid catfish) which is a hybrid of Clarias and Heterobranchus.

Feeding the fingerlings is one of the most important parts of their growth. Fish feeds are pellets that range from 0.1mm in size to 9mm. For fingerlings, they eat 2mm. Different factors contribute to how often you feed your fish but always ensure that you do not overfeed them as that could lead to high mortality rates. Other factors that could contribute to the mortality rate include overstocking the pond and improper sorting. At Indigo Africa, we produce fingerlings and fish feeds for all the different species of fish and they can serve both smallholders and commercial farmers. We also produce snacks that are rich in Omega 3, Omega 6, and Vitamin B12 Essential Micro Nutrients. To help our customers enhance their performance we offer them guidance and advice.